To be (despicable) or not to be, THAT is the question!! 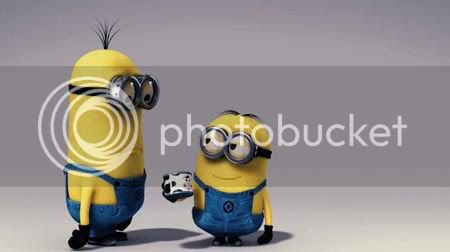 Yellow minions. How cute are they!?

Despicable Me marks my first full-length 3-D movie of all time. Heck, it IS my first! But fancy movie effects aside, how did the despicable baddie measure up to bigger summer blockbusters? Read on to find out...


Steve Carell (of Get Smart fame) voices Gru, who wants to the most villainous villain of all time. When one of the wonders of the world goes missing, and replaced by a pumped-up balloon version of it to boot, all eyes are on Gru. But did he actually commit that crime? Unfortunately NOT! In his mind anyway. And thus he, along with his awesomely cute and funny minions (see yellow squigglies) devise a plan to commit the crime of the century. If you have seen the trailers, or at least seen the posters, you'll know (or guess) that he is out to steal the moon. Yes, The Moon! That's one small step for man, one giant leap for mankind...THAT MOON!
Armed with a 10 year-old sketched out plan he sets out to get capital to steal said object. And where should he look for it but at the Bank of Evil (I guess criminals aren't allowed to bank at the same well....bank). Funny thing is that this Bank of Evil is located in an *drumroll please* actual bank!

Gru faces competition in the form of the actual Pyramid criminal named Vector (voiced by Jason Segel). Now here's a real bada$$! This guy has sharks, heat-seeking missiles on top of his house, lasers, hammers, rocket launchers, the works! And now they fight for the ultimate prize.
Julie Andrews voices Gru's fussy, hard-to-please mother who never rewarded his efforts. You might say she was the cause of Gru's turning into a criminal. And to think, Julie Andrews has played everything from a nun to a queen (on several occasions) and here she is, a hard-hitting criminal mom.

Russell Brand (the future Mr. Katy Perry) holds his own as the criminal version of James Bond's Q. His unmistakable British accent is very apparent but suitably older. He lends his voice to Dr. Nefario, Gru's biggest support. Every supervillain needs a weapons creator after all. He plays a bigger part towards the end of the movie.

Gru, facing major problems from his biggest rival adopts (takes advantage) of three orphaned girls Margo, Edith, and Agnes (who strangely bears a similar resemblance to Boo from Monsters Inc.). The funniest part is that there is one scene in which will remind Pixar fans of a certain animated movie trilogy, and this movie comes from Illumination Entertainment! I could have sworn that it was a Pixar movie based on those two points. I suppose it was merely my imagination.

Overall a very fun-filled movie. My bunch of movie-goers laughed our hearts out practically the entire film, which says a lot! The only part I wasn't convinced off, coincidentally the main point of the movie, is that the villain was not despicable enough! Imagine that, a villain that isn't bad enough. The yellow minions will have you in stitches even though you won't understand a word that comes out of their mouths.
Apparently, Malaysia is being blessed with a cinema opening even before America's. Despicable Me hits Malaysian cinemas on Thursday, 8th July 2010 and spans approximately 1 hour 30 minutes.


So if you're feeling stressed, or want to escape the footie fever all around, sit yourself down and immerse yourself in the world of the Superbad!

Disclosure: I was not compensated for this review financially or otherwise. Everything mentioned are my own thoughts based on my experience.
By Life's Simple Pleasures at 12:24 AM