Today I got the chance to watch one of the most anticipated movies of the month, in Underland. Oops, Wonderland! Haha… see how different people have different takes on things. 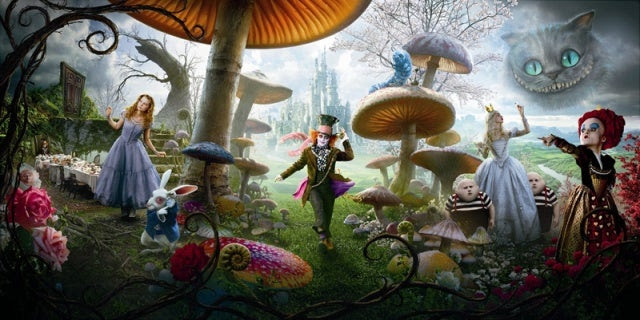 I saw the 2D version, probably not as fun as the 3D ought to be but you skip the supposed massive headache that follows so that was a good thing.

This version by Tim Burton is different from the original Disney picture. Think of this as the live action sequel to its predecessors animated movie glory. The movie started of well, with lots of 3D bits, which of course I didn’t get the full effect of.

is now grown up, a 19 year old embarking on the next phase of her life, marriage. Or so it should have been. But you know that isn’t how the story goes. From the trailer we see her plunging into that little rabbit hole like the first time and encountering the same few characters who become friends. But this time there are quite a few extra characters if I remember correctly. Some scarier creatures haunt the screen but no worries, as good usually prevails at the end.

The ending is as expected. Let’s face it, most of the time you know how a movie will end just by reading a summary or watching a trailer. But it is the inserts that count and make a movie stand out. And this time, I didn’t know what to expect with all the new characters.

Commendable performances courtesy of Captain Jack ( Johnny Depp aka The Mad Hatter) yet again. Check out that makeup! And how gaunt his face looks. Sadly Anne Hathaway’s (The White Queen) part was rather small, she is one of my favourite actresses. I personally thought the pale white skin didn’t match that shade of lipstick, but that is just me. It looked the shade of a bruised plum!

Helena Bonham Carter brought a very believable and horrible Red Queen. I dare you all to recognize Absolem’s voice actor. How fun! And wise he sounded. The Cheshire Cat was a little out of character based on the original, but everyone has a little good in them.

There are quite a few funny moments. Even during the very beginning so try not to get stuck at the concessions counter like I was. Goodness, who knew they only opened at 10:30 a.m. on a weekend nonetheless! And the movie was scheduled to start at exactly that time too. I watched this at GSC’s Mid Valley branch where a lot of people were spotted queuing for free tickets.

As for the movie, the humour was there, the characters loveable and colourful. Yet, I felt that the movie lacked the life-like effect during the nature scenes. I think it would have been more fun, especially for 3D goers, should there have been more going on. But all in all, a good, fun way to spend close to 2 hours.

P.S. Look out for the Mad Hatter's very cute antic at the end of the movie. You won’t want to miss it!

By Life's Simple Pleasures at 1:33 AM