Movie Buff: This Is It...A Tribute to the King of Pop

Besides food, skincare, bodycare, and recently makeup, my other passion is entertainment. And especially in the form of movies. I haven’t had the time to go to the cinemas despite all the great new movies that are out. My last was Transformers 2!! Tonight (or Wednesday 28/10/09) however, I was given the privilege to watch a special screening of a particular movie. I just couldn’t pass on this one. 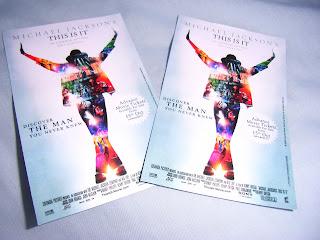 It was entitled, This Is It. for those of you who don’t already know what it’s about, well…someone has been hiding out somewhere I guess. This is the Michael Jackson movie that has been much anticipated and talked about worldwide. And I can see why after watching it.

It isn’t a biopic, nor a documentary. What it is, is an up close and personal concert of sorts. In a nutshell, and without spoiling too much, it is the practice sessions MJ went through while preparing for his tour. You go behind the scenes, watch the rigorous audition process, the colourful and realistic setups, the videos shot just for the tour, as well as witness the genius that is Michael Jackson.

This movie, all 1 hour 40ish minutes of it, was thrilling to say the least. Watching the King of Pop belt out his most famous hits while performing his dance routines, complete with backup dancers and props, what excitement! He sang, he danced, he directed. If you ask me, I’d have thought those legs of his had never stopped dancing for a day! The voice, still the same, still enthralling.

There are a few humorous bits which are sure to make you laugh. Or make your sides hurt. I really liked one prop in particular; a really cool one used in some of the first few performances. Look out for that one! The costumes where so realistic! Especially for the Thriller performance! Didn’t think they’d skip that one did you?

If you like instrumental music, look out for the uber brilliant female guitarist! Awesome I truly must say! A real rocker chick! Without the goth makeup. See it to believe it!

All in all, a MUST watch. Whether or not you are an MJ fan, if only to understand what the hype is all about. I only regret it ended so early. A crash course for the non-MJ fan and a masterpiece for fans. I hope you booked early, I hear those tickets are flying fast!

Watch it and let me know what you thought about it. I just hope you find it as amazing as I did. Public screening starts today (Thursday 29/10/09)!

Well, what are you waiting for!! THIS IS IT!!

By Life's Simple Pleasures at 2:23 AM